The story behind those sensational photographs
By Cameron Woo, June 2012, Updated June 2021 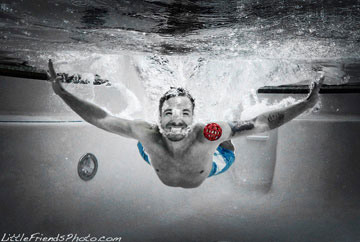 The overnight sensation of Seth Casteel’s breathtaking photographs of diving dogs is a publicist’s dream — the stunning photos went viral and now have been seen by millions, gaining notoriety and admiration for the photographer, bringing offers for licensing and business deals, and a book contract from Little, Brown. Casteel’s collection of photographs entitled Underwater Dogs will arrive this fall. Behind every great picture is a story, and we talked to Casteel about his journey from pet portraitist to viral phenomenon.

How did the photos get introduced online? Was it your goal for them to go viral?
The underwater photos were already online—on my Facebook page and my website (littlefriendsphoto.com). Somebody snagged one of the photos and reposted it on Reddit or Google+. The ripple effect that followed was just out of control! I could not have even dreamed something like this was even possible. People ask me, “How do you go viral? I want to go viral!.” I don’t think this is something you can really control or plan—I mean, I had absolutely nothing to do with it. Unexpectedly, millions of people connected with these photos.

The reach of these photos is unbelievable. At one point, UNDERWATER DOGS was the number one World News Headline in some countries—number one! That is just ridiculous! (laughs) Sometimes the news can be so negative. It was cool to see something so simple, silly and positive in the headlines. The greatest thing about this entire situation is knowing that these photos make people smile. That is something I'll never forget.

I've seen a few accounts written about your surprise at the rapid exposure—can you share your reaction in those early hours-days as the photos went viral?

My website crashed big time. It was set up on a shared server and I was only allowed a limited number of concurrent connections. My site used to get about 200 unique visitors a day. All of the sudden, there were hundreds of thousands. Crash!! I was caught off-guard! A good problem to have though …

On the evening of February 9th, I received a few e-mails that my photos were posted on Reddit and Google. I dozed off and then woke up to various phone calls at 3 am on February 10th. People and journalists were calling from all over the world. Some were photo agencies that wanted to represent my portfolio. I was obviously confused! I checked my website analytics for that morning and was already at 35,000 hits in just a couple of hours. I checked my bank account and thought there had been a mistake—I had received dozens of print orders overnight, from countries all over the world!

The power of the Internet is so incredible. I need to send the World Wide Web some flowers and a thank you card!

Tell me how the book came to be? And how you've worked with your editor to craft it?
It’s a dream come true! Long story short—after the photos went viral, various literary agents inquired about representing an underwater dogs book project. I chose an agent. We crafted a book proposal together. Proposal was sent out. Bites from nearly all of the top ten publishers in the world. Book goes to auction. Book sells. I took off on my book adventure, working with another 125 dogs underwater all across the country! Selected the winning shots with my editor. The book is currently in design phase. Whew!

The images are so rich and colorful, you must be excited about seeing them in print, in a book, in a single collection. Are there some new things in the book we haven't seen!
Oh, man! You bet I am! I am especially excited about the new, never-before-seen photos I've been working on. A Pug. A 12-week-old puppy. A Wolf. And many other surprises! The only tricky thing was deciding which shots would be in the book. I have so many now, but with the help of my editor and agent, we were able to choose. I couldn't be happier about the final collection.

You must shoot dozens, hundreds of shots to get one you are happy with. Must be a long day's work for you and a great play session for the dogs ...?
It really depends on the dog. Sometimes I just need a few dozen shots. Sometimes I need hundreds. Photographing dogs underwater is completely unpredictable. There are so many variables that you have no control over. To capture that special moment, not only does it actually have to happen, but I have to make sure the camera is in the right place, focus is achieved and there aren’t too many bubbles in the water to block the scene. The one variable that I can usually count on is the toy. I can throw the toy where I want it to be, or I can even just place it in the water. One of the most difficult shoots I have done is with a Cocker Spaniel named Oshi. Oshi was only interested in one toy and one toy only—pirate penguin. It’s a toy for kids, I believe it’s meant for the bathtub. It’s a battery operated penguin, dressed up as a pirate, and it propels through the water. The path is uncertain as it sporadically zips through the water, left, right, up, down. Oshi loves it! So I had to chase Pirate Penguin with Oshi! It was a super challenge, but the photos are hysterical!

How close do you need to be to the dogs to get the kinds of shots that you capture?
CLOSE. A few feet. A few inches. The closer the better. The working distance is one of the biggest challenges, but also the reason why the photos have such an impact.

Purchasing the kind of topline photo equipment that you use for underwater photography is no small investment, how confident (or nervous) were you about jumping into something so new and uncharted for you?
At first, I was a bit nervous about the situation. If the housing failed, we're talking about thousands of dollars. This was my one-shot. I’m not sure how I could have purchased another one. I was already avoiding bills to pay for the first one! As I began to spend more time in the water, my confidence grew. And of course, once my confidence was at the top, my port was crushed in the pool, flooding my housing, but miraculously I was able to remove the housing from the water before the camera was destroyed. It got a little bit wet, but still works just fine!

You also have a non-profit, Second Chance Photos. Can you tell us your plans with that?
The mission of Second Chance is to increase adoption rates of homeless pets through photography and marketing, as well as improving the overall image of rescue and adoption. Because of the popularity of the underwater photos, I am now able to partner with other non-profits to expand the efforts of Second Chance—I’m so excited! My career as a pet photographer began through volunteering. I am grateful I have been able to find a way to help our little friends.